broken world, and long to see revival in our churches. The words of the songs we sing – some old, some new – minister to us as much as anyone. As long as the words and music continue to bless our audiences, whether they’ve heard the gospel preached a thousand times before or they need to hear it just once, we’re going to keep on singing. We pray that you will enjoy our smooth blend of four-part harmony, because it’s a joyful sound that we make, but more importantly we pray that God would bless you and keep you wherever you’re at in life. We also pray that through our music, The Fraser Valley Quartet might “do life” with you now: encouraging you, praying with you, and praising with you. On that day when every knee shall bow and every tongue confess that Jesus is Lord, we’re all going to be praising together.  Formed in 2014, the Fraser Valley Quartet currently includes Brian Shauf (tenor), Rick Brands (lead), Brayden Hirsch (baritone), and Gary Van Ry (bass).

Three and Company is a contemporary southern gospel trio from Alberta, Canada with smooth harmonies and songs to uplift and encourage the church body. They have been singing together as a trio since 2000.  The group is a Member of Canada’s Gospel Music Association.  Brent Anderson, Dale and Dianne Johnson al

l grew up singing in their local church. Brent who is married to Valerie has 11 year old twin boys. He works full time as well as being a sales representative for a jewelry company and working as a artist rep for 145 Live Solutions.  Dale and Dianne (one of set of triplets) have been married for 38 years. They are parents to twin girls and grandparents to twin girls and two boys. Dale works full time in Leduc and Dianne works at a ladies clothing store in Edmonton.

the Country Music scene across North America. Jack and the J.R.B. band have been blazing a trail across North America using “Market Place Evangelism” techniques that have been instrumental in introducing thousands of non-churched people into a new relationship with Jesus Christ.  Although “country” in its nature, Jack and his team have something old and something new with music that attracts young and old listeners wherever they perform within a “Market Place” setting. Jack and his gifted team entertain and encourage audiences with music that endorses traditional family values, faith in God, and a relationship with Christ that gives our world help for today and hope for tomorrow.

In the spring of 2001 some folks from the Broadview Evangelical Free Church in Salmon Arm BC, decided that they would like to get together once a month to sing the old hymns. One such evening that fall, four men attending this “Songfest” decided they

would like to sing together in a male quartet.  Thus the Good News Quartet was formed.  Charter members are Reinhard Liebich as first tenor and Harvey Sawatzky as second tenor.  Abe Stobbe singing bass joined the group in the fall of 2008, and Ernie Wedel replaced our former baritone in the fall of 2010. Randy Davidson, singing baritone also, sang bass in the quartet a few years ago.  June Sawatzky does some of the music arrangements and accompanies the group at the keyboard.  Our desire is to present the Good News of the Gospel in word and song, and just as the Holy Spirit is ministering to us as we sing; our prayer is that He will also minister to our audience.

Garry Jespersen, a retired businessman, is a talented saxophone, piano, and vocal musician.  He lives in Kelowna , B.C.   His eleven recordings “Musical Moments” are available on CD.  Nine of these are easy listening Gospel music favourites, one of classic 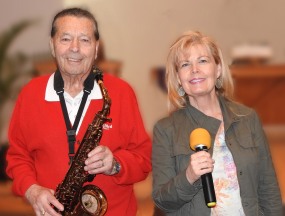 love songs, and a Christmas CD.  For a number of years Garry and Nora had the opportunity to travel and minister in word and music in B.C., Alberta, Washington, and Arizona. Garry says, ” It  has been a real blessing, and we thank God for it.”  Nora went to be with the Lord June 2, 2014 after a long struggle with Alzheimer’s.  Garry was blessed to find someone to share and encourage in life. In July 2015 he and Vi Rempel were married.  Miriam Keith joins Garry at this year’s Singin’ Good News, and we know you will be blessed and encouraged in your walk with the Lord through their music.

and had up to 100 students per week.  He played for Prince Philip in 1962, was part of the gospel group “The New Covenant Children” who played the Montreal Summer Olympics in 1976 and recorded and toured with Joanne Cash (Johnny Cash’s sister). He’s also played with Jerry Goff and the Singing Goffs, the Antone Indian Family and Grand Ole Opry stars, Mac Wiseman, Carl and Pearl Butler and Red Sovine. He has won the Canadian Gospel Music Association’s instrumentalist of the year award four times.  Neil feels blessed to be able to share God’s gift to him and one of the loves of his life.

Pete Unrau is a dynamic and humorous communicator, with 58 years of pastoral ministry in both the US and Canada. His gift of speaking on the joys and trials of life,

always bringing people back to a personal God and His unchanging Word, makes this man a delight to any audience. He and his wife, Shirley have traveled and spoken widely across the US & Canada and in 63 countries of the world. They have been on staff at Power To Change (formerly Campus Crusade for Christ) for 17 years. They are the founders of OASIS RETREATS, a vital SOUL CARE ministry of help and healing for weary and/or wounded pastors and missionaries from around the world. They also have frequently team-taught at FAMILY LIFE CONFERENCES all across Canada. Since retirement from P2C they have remained active as Interim Pastor and speaking at numerous churches and Retreats. Pete also has a vital ministry of mentoring numerous younger pastors and Christian leaders in the Okanagan. He has been invited to come regularly to Viet Nam for 2 week periods to teach pastors of the Under Ground Church. They have 4 married children, who are all actively involved in their churches. All 3 sons are ordained ministers. They also have 10 grandchildren (one is in heaven now), and five great grandchildren. Both Pete & Shirley Unrau are graduates of Briercrest Bible College. Pete also obtained a Master’s degree from Western Oregon State University.